New Mexico may not be on the same level as New York or California, but it surely has more than a handful of amazing places and attractions you mustn’t miss. Hidden mostly underground is the Carlsbad Caverns National Park, one of the top tourist destinations in New Mexico. It has 120 caves and features outlandish geological formations. Want a wide-open space with stunning landscapes? The White Sands National Monument boasts its gleaming white gypsum sand that has formed into a landscape of dunes. During autumn, Albuquerque holds the world’s largest hot air balloon festival. It’s such a popular event that it can attract over 80,000 people. They also have live music and other festival activities apart from the main hot air balloon show.

Take a scenic ride at Cumbres-Toltec Scenic Railway where you can see beautiful views of grassy and hillside meadows and stream-laced mountains. Just so you know, you may want to prepare yourself as the ride has some thrilling moments, especially when it crosses the Cascade Creek. In a mood for some winter sports activities? Check out Taos Ski Valley in the Sangre de Cristo Mountains. The ski resort has 110 trails for snowboarders and skiers of every skill. 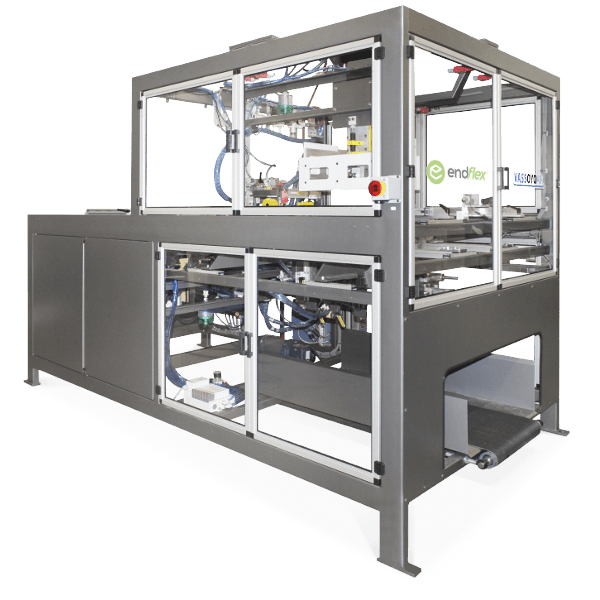 EndFlex is a Paxiom brand that focuses on manufacturing solutions for case forming and case packing. Our large selection of tray formers and erectors are under two product lines: Vassoyo and VassoyoAir.

Manufactured in two models, the Vassoyo 3029 and 3934 can erect up to 40 trays in just one minute. Both packaging machinery are capable of forming large or small tray sizes, with or without a lid. Our Vassoyo mechanical tray erectors are engineered to work on trays of multiple sizes and configurations with the use of hot melt glue. Moreover, they’re capable of gentle handling to maintain the aesthetics of the trays.

Equipped with glue guns, our Vassoyo Mini applies glue to the minor flaps of the tray before it goes to the forming section. As its name suggests, this tray erecting machine works only on a variety of small trays, whether they have a lid or not. Built with a compact footprint, this Mini tray erector can fit any production line. For the glue application, the machine comes with a glue system.

For extra-large trays of different configurations, we offer our Vassoyo XL, another automatic tray forming machine that folds and glues your tray blanks one at a time. Constructed with a heavy-duty steel frame, our Vassoyo XL is also mechanically driven, which only requires low maintenance. It can form up to 30 trays per minute. Common industries that are catered by Vassoyo XL are toy, gaming, hardware, consumer goods, and auto parts.

VassoyoAir for Produce or Showcase Trays

Designed for showcase and produce trays, this model of VassoyoAir packaging machine is equipped with a vacuum cup technology to efficiently pull down the tray blanks one by one. Like the previous Vassoyo tray erectors, it applies a hot melt glue to the flaps of the blank. For produce trays, it uses the standard version of the mandrel while the retractable mandrel is utilized for showcase trays.

A breaker box-style tray is mostly used in fully automatic production lines in several food and beverage applications. This VassoyoAir model for breaker box trays is designed to form tray blanks into a display-ready tray. It’s a mechanically designed machine and is equipped with a high-performance welded steel frame to provide a 24/7 operation. This tray former also has a low-maintenance vacuum system coupled with self-cleaning vacuum cups, improving the reliability and convenience of the machine.

Ideally used for fresh produce, poultry, meat, snacks, and consumer goods, triangular corner post trays, it’s no surprise how triangular corner posts trays are popular these days. As such, we have created our own forming machine for this specific tray configuration. Coming from the VassoyoAir series, this automatic tray former is built with a high-capacity hopper for an efficient and reliable blank loading. It’s capable of streamlining the maintenance process thanks to its quick and easy access machine parts. This particular model of VassoyoAir can operate 24/7.

With a pre-load station that works by holding bundles of corrugated trays, this unique VassoyoAir XL uses a top sheet feed mechanism to feed blanks to the machine. It’s operable on wide trays ranging from large to extra-large sizes, with or without a cover. With its high-speed roller mechanism, the indexing of tray blanks is done at a constant speed.